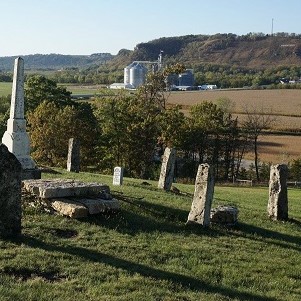 Established in 1866, this nondenominational, public cemetery is located on a bluffside in South Rushford. Charles Sherwood recorded a plat of the Oakwood Cemetery with the Fillmore County Recorder in November 1870. Sherwood continued selling plots in the cemetery, and it is believed two dozen people were buried there after 1870. The cemetery was neglected for several decades. A group of citizens filed Articles of Incorporation for the Oakwood (Sherwood) Cemetery Association with the Minnesota Secretary of State on August 22, 2012 and Fillmore County Recorder on August 23, 2012. Since 2012 a board of directors has continued to revive the use of this cemetery.